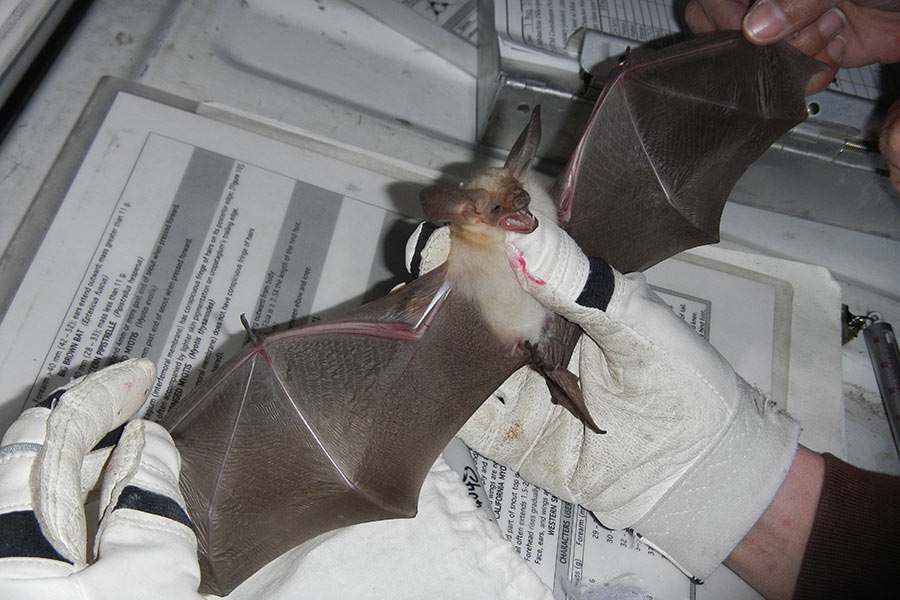 What to do if you find a bat in your house

Salt Lake City — Though most Utahns probably associate bats with fall and the Halloween season, you shouldn't be surprised if you find one in your home during the summer months. Utahns may see more bats this time of year because the baby bats (also called pups) are learning to fly and leaving their roosts for the first time. Here's what you should know about bats in Utah and what to do if you encounter them.

There are currently 18 confirmed bat species in Utah, but there may be more. They are the only mammals capable of true flight. Bats are found throughout the state and can be abundant wherever they can find food, shelter and water. The greatest diversity of bat species in the state is in southern Utah.

Utah's bats feed almost exclusively on insects. Bats rely on standing water for both drinking and as a source of insects. Female bats have increased water needs when they are producing milk for their young. Research has shown that during hot, dry years where there is reduced standing water — like we're seeing in Utah with the current extreme drought — fewer female bats give birth to and raise babies. So the drought could potentially have an impact on the number of bats in the state.

When insects aren't available during the winter months, many of Utah's bats either migrate or hibernate (although some species do a combination of both and others stay active year-round). Sometimes, they hibernate in caves and mines, and recent research in western states has shown that many small bat species also hibernate in the crevices of cliffs. Bats in Utah do not usually hibernate in large groups like they do in many eastern U.S. states. They typically hibernate either in small groups or by themselves.

Five Utah species primarily migrate, flying south from late August through October and then returning in April and May.

If you discover bats roosting in your home, what should you do?

Groups of bats in homes are often maternity colonies of female bats and their babies. The females typically come out of hibernation and take up residence in a structure to give birth, usually in May or June. They then have their babies and begin to increase their activity to support lactation — this is typically when people begin to notice the bats. The young are also becoming more active and starting to fly, which also draws more attention.

"This timeframe is the hardest time of year for dealing with bat nuisance issues," Hersey said. "Since the young can't fly yet and are reliant on their mother's milk, preventing the mothers from returning to their roosting spot will kill the babies. Because bats are a protected wildlife species, it's illegal to kill them.

"I've also seen where poorly timed removals can lead to bats in attics suddenly finding their way inside someone's home because the mothers are trying to reach their young. So, unless there is a human health and safety issue where bats are coming into close contact with people, we do not permit bat colony removal during this time of year. However, you can take actions to prevent them from getting into the living areas of your home. Although it may be inconvenient, you should wait until the young can fly, and then you can safely, humanely and permanently address the problem."

If you suspect there is a colony of bats in your attic, you will need to contact a local, permitted wildlife nuisance control company for help. The DWR will coordinate with that company to authorize the removal at specific times of the year that won't harm the pups.

What to do if you discover bats inside your house

Because bats can be carriers of rabies — a deadly virus that can be transmitted to people — you should never handle a bat with your bare hands. If you do have physical contact with a bat, contact your local health department for guidance. If you find a bat inside the living area of your home, open a door or window, turn off the lights inside your house and turn on a porch light outside. Leave the room and allow the bat to leave on its own.

If the bat does not make its way outside on its own, you can carefully remove it. Here are tips for removing bats from your home:

Bats will also occasionally use porches or overhangs as a night roost, where they can rest, digest and leave a mess between meals. If bats are regularly using a porch, try hanging streamers, balloons or other objects (like old CDs) that will move with a breeze. This seems to discourage bats from hanging out.

Tips to prevent bats from roosting in your attic