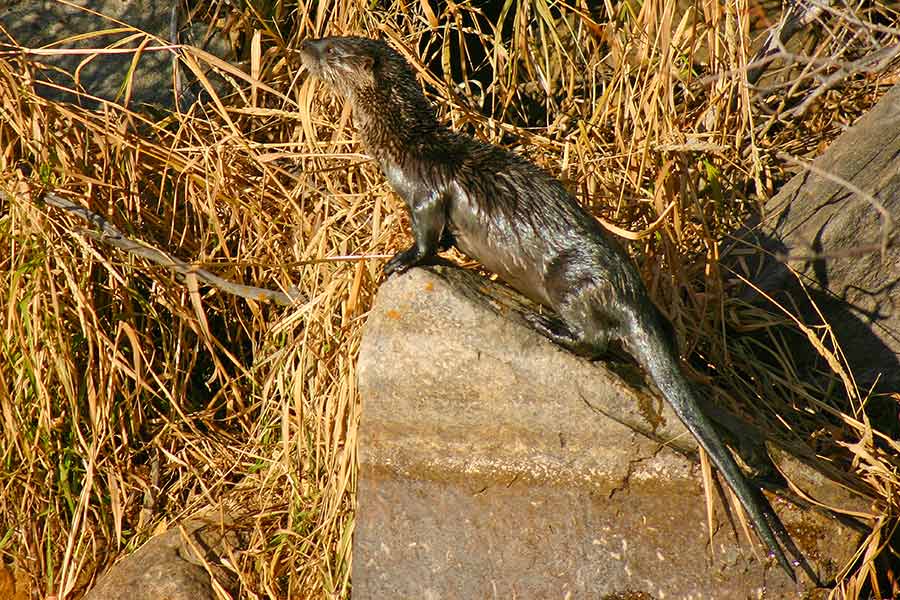 Salt Lake City — In an effort to learn more about where river otters are located throughout Utah in order to better manage the species, the Utah Division of Wildlife Resources is asking the public to report any otter sightings.

Northern river otters are native to Utah, but their numbers have never been very abundant. Unregulated trapping by early settlers — which resulted in overharvesting — as well as changes to their habitat due to increased development caused otter populations to decline. In 1899, the Utah State Fish and Game Commission (as the Utah Wildlife Board was formerly called) classified the otter as a rare species, and the state legislature protected them from harvest that same year. Since then, there has been no legal harvest of river otters in the state of Utah.

Due to their secretive nature, wide ranges, and low densities, otter populations are difficult to monitor and there is not a population estimate, currently.

As the name suggests, river otters are primarily found in rivers, reservoirs and lakes, and mainly eat fish. However, they've also been known to prey on small mammals, birds, crayfish and insects.

"River otters are important because they are an indicator of how healthy the aquatic environment is around Utah," DWR Non-game Mammals Coordinator Kim Hersey said. "They have a low tolerance for polluted water and require an abundant prey population. Knowing where they are located around the state is vital to helping us manage this species. Anglers and other river recreationists are on the water a lot and can help us understand the distribution of otters throughout the state by reporting any sightings."

To report a sighting of a river otter, email a photo or video of either the animal or signs of the animal, including tracks or feces, as well as a specific location to This email address is being protected from spambots. You need JavaScript enabled to view it..

Otters are easily mistaken for other wildlife that are common in rivers and lakes throughout Utah, including minks, beavers and muskrats.

"Although there are many differences between the species — and it is easy to tell them apart out of water — when you just see a brown, furry face swimming, it can be quite easy to misidentify the species," Hersey said.

River otters are distinguished from beavers and muskrats by several characteristics:

Like otters, minks are members of the weasel family and have a similar body shape. The biggest difference between the species is the size. A mink is small and is similar in size to a domestic ferret, while an otter is considerably larger — over 2 feet long and around 20 pounds. Additionally, otters have rounded noses, while minks' faces are much more pointy.

"The data from these sightings will help us update the state river otter management plan," Hersey said. "Before we can plan for the future, we need a good idea of the current status of otters in the state. Based on these reported sightings, we will follow up with targeted surveys to gather additional information on otter populations. It will also help us identify areas without otters that may be candidates for future transplant populations."