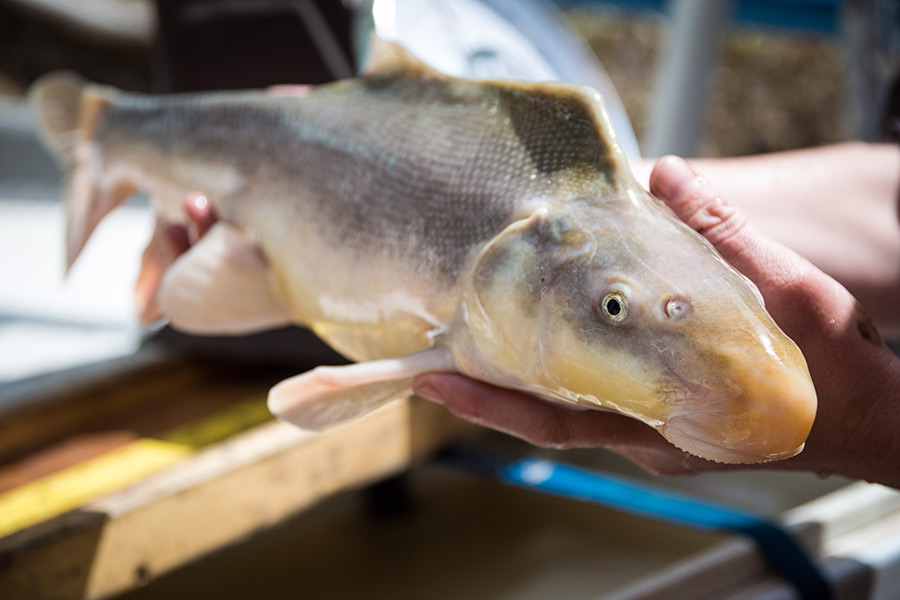 Razorback suckers may be reclassified as threatened under ESA; Scott and Norma Matheson Wetlands Preserve project helping the fish recover

Moab — Due to a lot of hard work and partnerships among several state and federal organizations, the U.S. Fish and Wildlife Service is proposing to reclassify the status of the razorback sucker from endangered to threatened under the Endangered Species Act. The proposal was published in the Federal Register on Wednesday and will be open to public comments until Sept. 6. A recently completed project at the Scott and Norma Matheson Wetlands Preserve in Moab is playing a big role in helping this unique fish species to recover.

The razorback sucker is an easily recognizable brownish-green fish with a bony hump on its back. When fully mature, this fish can reach lengths of up to 3.5 feet and live more than 40 years. It is only found in the Colorado River and its tributaries — nowhere else in the world.

Changes in historic river flows and the introduction of nonnative predatory fish caused a huge population decline for the razorback sucker. By 1988, the adult population of razorback suckers in the Green River was estimated at 978 and declining quickly. The species was listed as endangered under the Endangered Species Act in 1991.

Life cycle of the razorback sucker

"To survive and escape predators, their recently hatched larval offspring need to drift downstream and enter into any nearby wetlands," DWR Native Aquatics Biologist Zach Ahrens said. "The wetlands provide a nursery environment with quiet, warm water — and better food sources — allowing the fish to develop and grow. Having this type of habitat is critical because these small fish have few defense mechanisms at this stage, especially against predators."

The program has implemented several projects to help in the recovery of the razorback suckers. One project included collecting some of the remaining wild adults and raising their offspring in hatcheries to help bolster the population. Once they were big enough to no longer be targeted by nonnative predatory fish, the razorback suckers were restocked into critical habitat in the Colorado and Green rivers and their tributaries.

Other projects have involved collaboration with the U.S. Bureau of Reclamation to coordinate dam releases, like the ones at the Flaming Gorge Dam on the Green River, which mimic historical annual spring flows. A wetland area at the DWR's Stewart Lake Wildlife Management Area along the Green River was also engineered to provide a nursery area for juvenile razorback suckers in northeastern Utah.

The Scott and Norma Matheson Wetlands Preserve is co-owned by the DWR and The Nature Conservancy (TNC). A recently completed multi-year project at the preserve involved building a wetlands nursery area to house and protect the juvenile razorback suckers from predators in the Colorado River. The conservation project began in 2018 and included installing concrete water gates and enlarged water channels that would mimic historic flooding by seasonally diverting water from the Colorado River onto the preserve, increasing the frequency and duration of flooding on the wetlands. Flood screens were then built to keep out large predatory fish that might threaten razorback suckers during their at-risk larval stage. 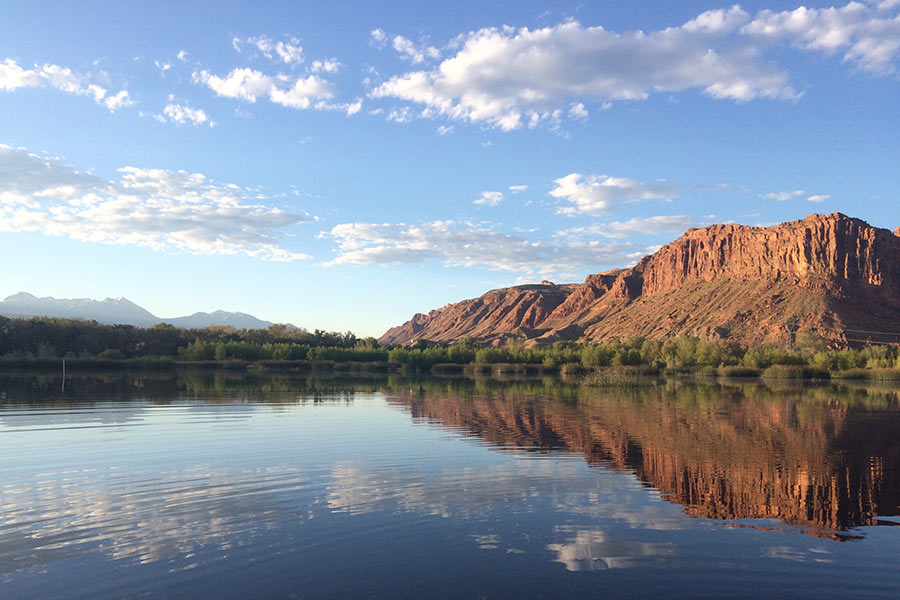 "In the spring of 2021, the Colorado River flowed less than half of the 70-year average," Ahrens said. "As a result, there were concerns that there would not be enough water to flood the new pond adequately. The river provided a modest flood, and the gate was opened just before peak flows. As the wetland was flooding, larval razorback suckers were captured by DWR biologists."

The project was completed on June 8 when biologists closed the in-flow gate to keep the larval razorback suckers in the flooded central pond on the preserve.

"That was a very exciting day to see the finished product of years of hard work and coordination," The Nature Conservancy's Matheson Wetlands Preserve Manager Linda Whitham said. "The young suckers grow quickly in warm water and can double in size within a month, greatly increasing their chance of survival. If the water quality stays optimal throughout the summer, these fish will remain in their sanctuary before being released back into the river this fall. We are so grateful for the partnerships that have made this project possible and for how it will help this species recover."

"The U.S. Fish and Wildlife Service's decision to propose downlisting the razorback sucker represents the power of partners working together on conservation," Tom Chart, director of the Upper Colorado River Endangered Fish Recovery Program, said. "Over the last 30 years, conservation actions have improved conditions in many areas of the Colorado River Basin that supported populations of razorback suckers historically. As a result of management programs involving hatchery production, predator control and flow and habitat restoration, these fish are now found in eight populations, and four of these populations can migrate and spawn in multiple locations."

"The proposed downlisting of razorback suckers demonstrates that positive conservation outcomes can be achieved working within the regulatory framework provided by the Endangered Species Act concurrent with responsible resource use and development through collaboration with partners," DWR Director of Utah Recovery Programs Chris Keleher said.