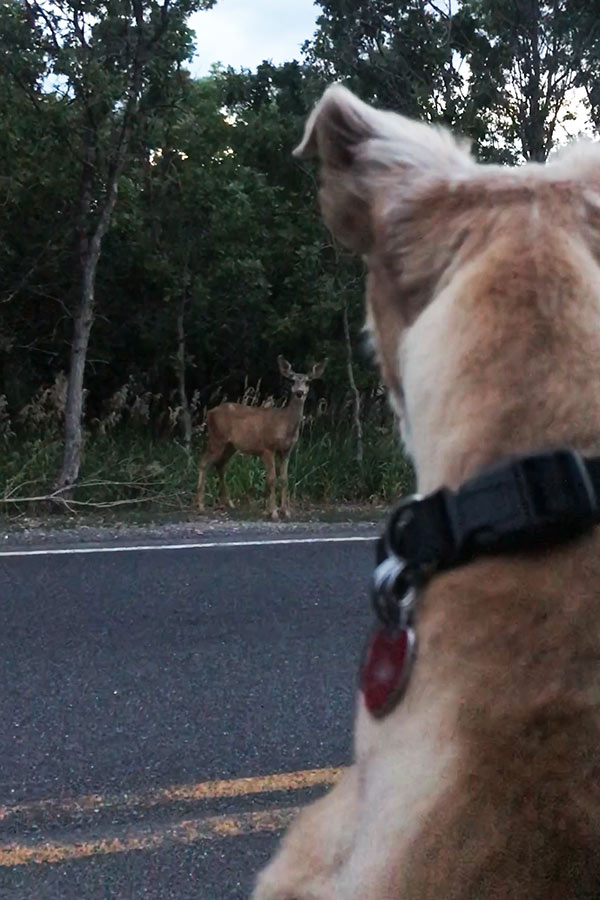 Salt Lake City — During the COVID-19 pandemic, many Utahns have headed outdoors as a way to get exercise and avoid cabin fever. However, if you are planning to take your dog on any hikes or camping trips this spring and summer, make sure your pet doesn't chase or harass any wildlife.

Utah wildlife often struggles to find food during the winter. By early spring, many animals are vulnerable and weak. Dogs that are off leash while in nature may act on their instincts to chase deer and other big game animals they see. However, that is harmful for the deer because by the end of winter, they are usually in survival mode.

"If they get chased, it uses up energy they may need to survive," Covy Jones, Utah Division of Wildlife Resources big game coordinator, said. "These animals are already depleted, and they often can't afford to waste energy. If you or a pet force them to move away from where they are trying to feed, it could be harmful."

Deer and other big game animals typically move to lower elevations in search of feed during the snowy winter months, which often brings them closer to roads and other populated urban areas where people and pets may be.

"National forests are some of the areas where people may encounter wildlife while recreating," Dixie National Forest Public Affairs Officer Kevin Abel said. "While pets are allowed in all national forests, they must be kept on a leash no longer than 6 feet while in developed recreation areas (like campsites) and on established, interpretive trails. Most of the other areas within national forests do not require dogs to be on a leash, but they must be under the owner's control at all times."

While there are many other areas throughout the state where dogs aren't required to stay on a leash, pet owners should not let their dogs chase deer, elk, moose or other wild animals. It can be harmful not only for the wildlife, but also can be dangerous for your pet.

"Wildlife is often unpredictable and may injure or kill a dog seen as threatening," Jones said.

Dogs that are off leash can also disturb nesting ground birds and can chase, injure or kill small mammals, deer, elk or moose.

It is also in your best interest to not allow your pet to chase wildlife, because Utah law states that a person may kill or injure a dog that is "attacking, chasing or worrying any species of hoofed protected wildlife."

"Pets allowed to run at large also are at risk from vehicles and predators," Dave Whittekiend, forest supervisor for the Uinta-Wasatch-Cache National Forest said. "If you care about your pets, it's in their best interest to keep them secured while you are recreating outdoors."

Here are some tips from Wild Aware Utah about keeping your dogs safe around wildlife: