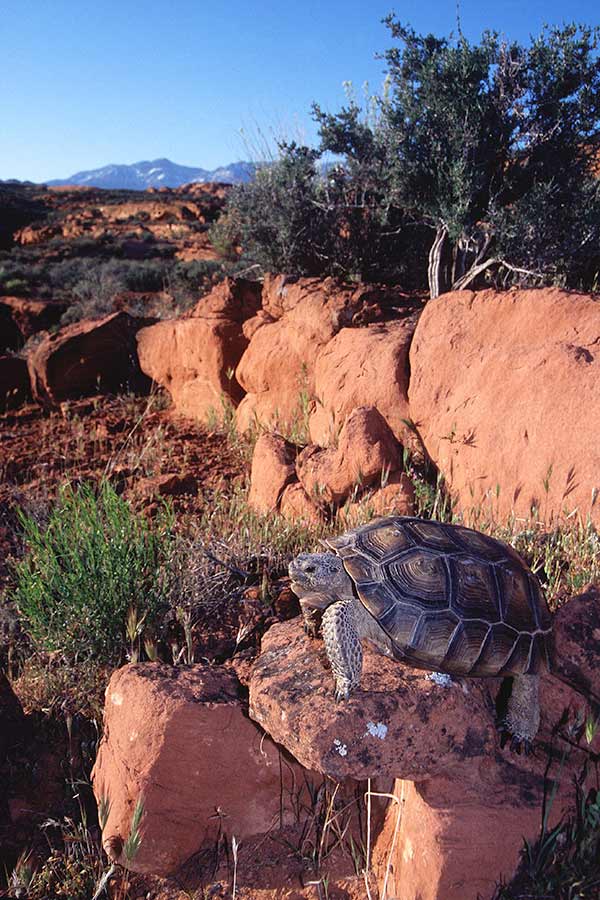 St. George — Almost 53 acres of private property in southwestern Utah — vital habitat for the Mojave desert tortoise — were acquired recently through the combined efforts of several agencies and organizations.

"We finally acquired the last piece of the puzzle," said Bill James, Habitat Section assistant chief for the Utah Division of Wildlife Resources.

That final piece, a recorded deed from Washington County for their donation of 22.73 acres, recently completed the match for an Endangered Species Section 6 grant that enabled the purchase of 52.72 acres of private property.

The newly acquired parcel is on the Red Cliffs Desert Reserve in southern Utah. Some of the highest observed densities of desert tortoises in the Reserve have been found on the piece of property that was just acquired: it is high quality habitat.

DWR Wildlife Biologist Ann McLuckie said the newly acquired property was one of the largest remaining parcels still in private ownership in the Reserve.

"Long-term protection of this entire parcel is vital," she said. "The parcel supports high numbers of desert tortoise and provides quality habitat for a number of other desert species too. Acquisition and protection of this property is essential to maintaining the integrity and connectivity of the Red Cliffs Desert Reserve."

The Utah Department of Natural Resources, which administers the state's Endangered Species Mitigation Fund, joined forces with the DWR, Washington County and The Nature Conservancy to acquire the property.

The Nature Conservancy played an especially important role, providing some of the funding needed to match the grant from the U.S. Fish and Wildlife Service to buy the land. The Endangered Species Mitigation Fund and Washington County both also supplied additional needed match, either as funding or in-kind contribution (land).

"Acquiring key inholdings in the Red Cliffs Desert Reserve has been a priority for many years," said Dave Livermore, Utah State Director for The Nature Conservancy. "The Nature Conservancy is glad to be a part of this partnership, and we salute everyone involved with this purchase. This is definitely a conservation win worth celebrating."

"This purchase is the culmination of many years of effort by private, local, state, and federal partners to find a solution to protect this critical portion of the Reserve," he said. "We appreciate the hard work and dedication of everyone involved in protecting the tortoises and their habitat."

The Mojave desert tortoise, located north and west of the Colorado River in Arizona, Utah, Nevada and California, was listed as threatened on the federal Endangered Species list in 1990. To help the species recover, the Red Cliffs Desert Reserve was created to protect the tortoise populations and their habitat from development.

Since that time, several cooperative efforts have helped protect the tortoises and their habitat. For example, the DWR recently partnered with several organizations to restore habitat burned by wildfire and to construct fences along roadways near tortoise populations.

Today, an estimated five to nine adult desert tortoises per square mile, or roughly 2,011 adults, are found on the Red Cliffs Desert Reserve, on average. Their population densities are much higher than most other Mojave desert tortoise populations rangewide.

McLuckie says habitat changes due to urbanization are the biggest threat the population currently faces.

"The same area where new homes are being built overlaps with areas where tortoises have shelters, forage sites and reproductive areas," McLuckie said. "Predators, vehicle collisions and illegal removal are also challenges the tortoises continue to face."

While it's illegal to capture a desert tortoise in the wild, there is an adoption program available for Utah residents who live outside of Kane, Iron and Washington counties. Click here for details about adopting a captive desert tortoise.