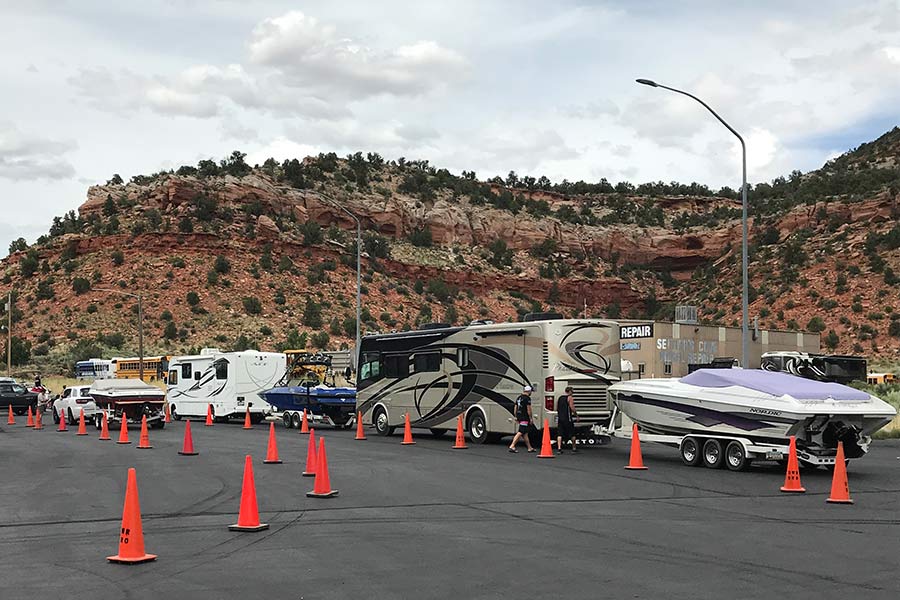 Salt Lake City — 2020 saw a very busy boating season, with Utah Division of Wildlife Resources and State Parks personnel completing 445,392 boat inspections statewide. The goal of these inspections is to prevent invasive quagga mussels from spreading from Lake Powell — and other states' infested waters — to Utah waterbodies that are currently free of invasive mussels.

Lake Powell is currently the only waterbody in Utah with quagga mussels and saw almost one-third of this year's efforts. DWR and National Park Service staff conducted 146,429 inspections at Lake Powell, a 45% increase from the previous year's inspections, and 3,701 decontaminations were completed at the popular boating destination.

"With an unprecedented number of boaters recreating at Utah reservoirs this summer, staff from DWR and State Parks did an amazing job serving the public, while continuing to protect Utah's waters from invasive mussels," Nathan Owens, the DWR Aquatic Invasive Species Coordinator, said. "We, our partners and many others are extremely grateful for their hard work."

"The majority of citations were due to boaters failing to stop for inspection at a mandatory inspection station or administrative checkpoint — misdemeanor citations — as well as infractions for rule violations such as failing to remove drain plugs while travelling on Utah roadways," DWR Aquatic Invasive Species Operations Sgt. Krystal Tucker said. "However, overall, boaters have been really supportive of our inspection and monitoring efforts. We really appreciate their cooperation and continued efforts to help us in preventing the spread of this invasive species."

While the busiest part of the boating season typically ends by the first of November, DWR and NPS personnel will still be performing boat inspections year-round at Lake Powell, and boaters are still required to comply with inspections.

The DWR also plans to increase efforts for next year to continue the containment of aquatic invasive species at Lake Powell. Part of those plans include providing additional inspection stations around Utah, as well as some additional locations for boaters to get professional decontaminations when needed. The DWR is also exploring new, more efficient methods for decontaminating wakeboard boats at Lake Powell and pursuing a pilot program to focus on automated data collection.

Steps for decontaminating a boat

To help prevent the spread of quagga mussels, after you are done boating at Lake Powell or anywhere out of state, you must do the following to decontaminate your boat if you choose not to have a professional hot water decontamination done: