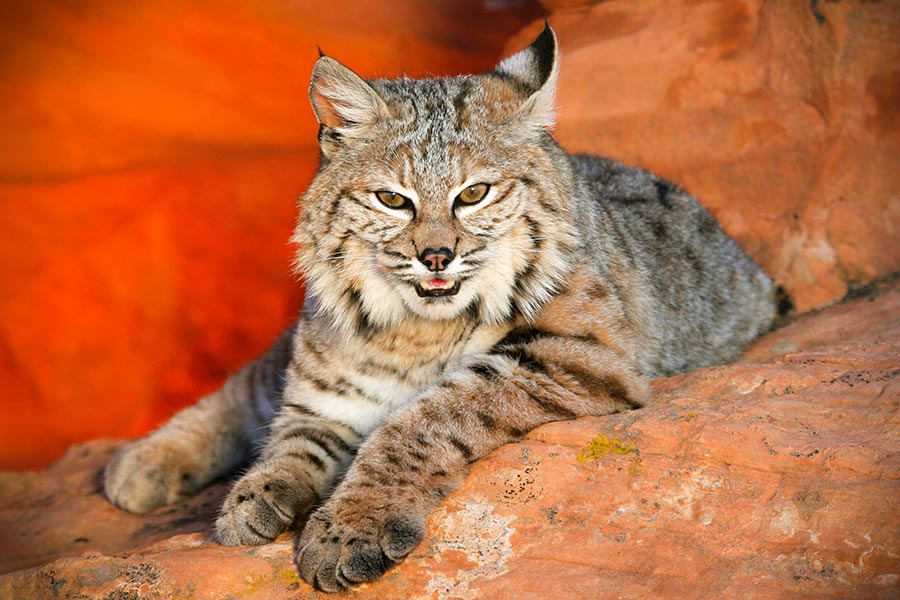 Salt Lake City — The Utah Wildlife Board approved a few changes to the 2020–21 cougar and bobcat hunting seasons, as well as a few other items during Thursday's virtual meeting.

Changes to cougar hunting for this fall

As with each wildlife species in Utah, cougars are managed according to guidelines established in a management plan, which includes regulated hunting. DWR biologists make determinations and gather input from hunters, individuals who don't hunt, and livestock producers, who sometimes have sheep killed by cougars. The plan is then finalized and approved by the Utah Wildlife Board. The current management plan was established in 2015 and expires in 2025. However, adjustments can be made as needed, depending on changes in cougar population numbers.

"Our goal is to maintain a healthy cougar population within the current distribution of the species across Utah, while also considering human and livestock safety, and declines in populations of big game species that cougars prey on," DWR Game Mammals Coordinator Darren DeBloois said. "As part of this, we factor in a proportion of older age animals, breeding females and healthy cougars in the population."

"The changes to the permit numbers adhere to legislation passed this year regarding cougar harvest and are also within the parameters established in the Utah Cougar Management Plan," DeBloois said. "It will help ensure healthy cougar populations, while addressing local issues of concern, including impacts to specific prey populations, livestock depredation and maintaining cougar hunting opportunities across the state."

The Utah Wildlife Board also approved increasing the harvest limit from one to two cougars between July 1 and June 30, 2021. They also approved a clarification to a rule for when it would be illegal to harvest a cougar with a GPS tracking collar. While the harvest of collared wildlife is discouraged, it is currently not illegal. Any future restrictions on harvesting collared cougars would be specified in the Utah Cougar Hunting Guidebook.

The board also approved an amendment of not allowing dogs when hunting cougars from April 15 through Nov. 2, 2021, in the La Sal, San Juan Mountains and Book Cliffs East hunting areas. People can still use dogs to pursue and hunt cougars if they have a valid permit to hunt bears in those areas during that same timeframe. Another amendment was approved to extend the limited-entry cougar hunting seasons in the Oquirrh-Stansbury, East Unit and the Wasatch Mountains, West-Strawberry Unit by 30 days.

A law passed during the 2020 legislative session authorizes the DWR director to take immediate action (under certain conditions) when a big game population is under the established herd-size objective for a management unit. Because cougars prey on big game species, predator management plans will be implemented to decrease cougar population densities in some areas of the state. Reducing those population densities should also decrease cougars' predation rates on mule deer and bighorn sheep populations that have seen significant declines in recent years.

Due to the new predator management law passed this year, DWR Director Mike Fowlks has opened a new fall spot-and-stalk hunting season for cougars, which runs from Aug. 1 to Dec. 31. This hunt will be implemented on a year-by-year basis, as needed, to decrease cougar population densities. Anyone interested in participating in this year's new hunt may purchase a $30 permit online or at Division offices and harvest a cougar without the use of dogs on any cougar hunting unit during this spot-and-stalk hunting season.

Another law also passed during the 2020 legislative session added a few clarifications to when and how a predator that is killing or damaging livestock can be removed. As a result of the new law, the DWR rules for bear and cougar depredation were updated to reflect that the response period following a livestock depredation incident is now 96 hours, instead of 72 hours.

Utah's bobcat management plan includes three categories for maintaining a healthy population: the number of juvenile bobcats harvested each year, the number of females harvested and a target survival rate for adults. Because two of the three parameters indicated a declining population, the board approved some slight changes for this year including the following:

The board also approved a few proposals regarding the annual Western Hunting and Conservation Expo held in Salt Lake City. The DWR holds a contract with the Sportsmen for Fish and Wildlife to hold the annual wildlife expo and to perform an independent permit drawing during the event that distributes limited-entry hunting permits. The conservation groups that host this annual event and conduct the drawing collect a $5 fee for each application to pay for the administrative costs associated with the expo and hunt drawing, as well as completing hundreds of beneficial projects that support and promote wildlife in Utah.

The five-year contract for Sportsmen for Fish and Wildlife to host the wildlife expo began in 2017 and was scheduled to expire in 2021. The wildlife board approved extending the contract, so Sportsmen for Fish and Wildlife will continue to host the expo until 2026. The board also approved 200 hunting permits for the drawing at the expo in 2021, with a few changes to which permits are offered in the drawing.

The board also approved a few other hunt expo items related to COVID-19 concerns for 2021, including not requiring in-person validation for expo permits, allowing the drawing to be done entirely electronically (provided an in-person or virtual expo is held), and that the minimum in-person attendance objectives be waived for the 2021 expo. The DWR also presented its annual audit of the hunt expo during the board meeting, and it was approved.

While the federal U.S. Fish and Wildlife Service manages the Endangered Species List throughout the U.S., the Utah Department of Natural Resources oversees a state-specific Sensitive Species list. A species is classified as sensitive if it is likely to undergo substantial population declines in all or part of its natural range without management intervention. Since 2001, DNR and partnering agencies have prevented 20 species on the Utah Sensitive Species list from needing to be federally listed as endangered or threatened.

The sensitive species list was recently reviewed and adjusted by the Wildlife Sensitive Species Advisory Committee and was presented to the wildlife board during Thursday's meeting. The proposed list includes 119 species or subspecies native to Utah.

The wildlife board voted to table the motion on the Utah Sensitive Species list until they receive more information about the new species that would be added to the list as sensitive species. Board members will hold a final vote on the list at a later date.

The livestream of Thursday's Utah Wildlife Board is available on the DNR YouTube channel.