Cougars (Felis concolor) are found statewide in Utah, occurring in habitat types ranging from rugged desert areas to above timberline. Seasonally, their movements and habitat selection follow their main prey — mule deer. While cougars will also feed on rabbits, elk or other animals, about 80 percent of their diet consists of deer. 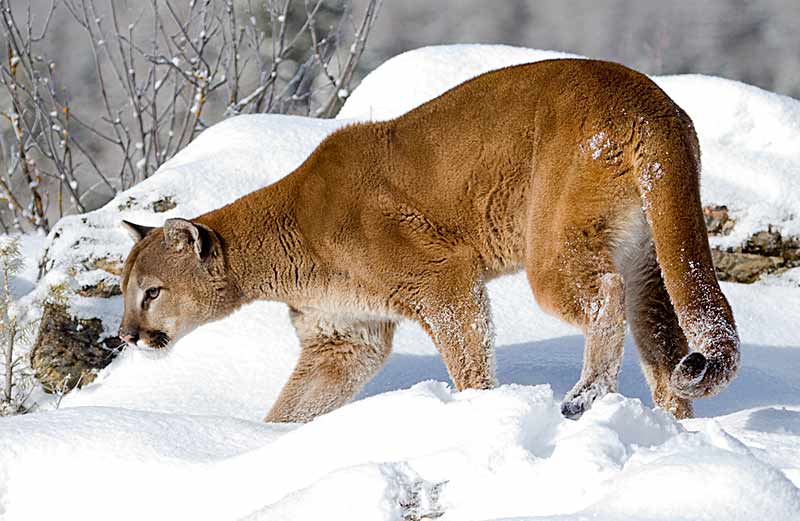 Cougars became protected animals in Utah in 1966. Prior to that time, harvest was unregulated. A bounty, ranging from $2.50 to $30, was sometimes offered from 1888 to 1960. Professional hunters and trappers working for Animal Damage Control (ADC) also killed cougars to protect livestock. From 1913 to 1967, an average of 106 cougars were killed annually by ADC personnel or by the public for bounty.

Cougar harvest by sportsmen has been regulated by the Utah Wildlife Board since it became a protected animal. Both a basic hunting license and a cougar permit are required to harvest cougars, and a limit of one cougar has been set since 1970, except for 1972, 1976 and 1983–84 when second cougar permits were available for some areas. Currently, cougars may be taken from 39 cougar managment areas throughout the state on a limited-entry application system.

Utah began a research project on Boulder Mountain in 1978 to learn more about cougars in Utah. The research topics included movements, home range, diet selection, habitat selection, differential vulnerability of age and sex classes to hunting, the effects of hunting, the effects of hound pursuit, and census techniques. This project was completed in 1989. A second research project was started in 1996 on Monroe Mountain and was completed in 2001. This project researched the accuracy and utility of using population estimators to manage cougar populations in Utah.

The DWR attempts to manage cougars in ways that are consistent with their prey base, habitat, and other biological and sociological constraints.