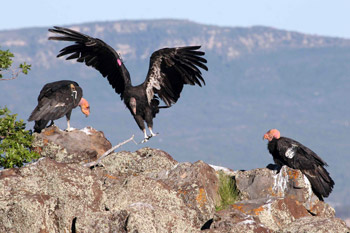 California condors: rescued from the brink of extinction

These magnificent birds are, once again, soaring through Utah skies.

California condors (Gymnogyps californianus) are among the largest, rarest birds in the world, and you'll find them soaring over the red-rock cliffs of southwestern Utah.

The California condor is one of the largest flying birds in North America. With a wingspan of nearly 10 feet — and a body that's four to five feet long — the condor is the size of a small car. In flight, condors are breathtaking. They can reach speeds of 50 miles per hour when soaring, and they sometimes travel up to 200 miles a day in search of food.

Up close, the condor's unique appearance adds to its charm. Adults have bald pinkish-orange heads and a distinctive white triangle pattern on the undersides of their jet-black wings. Juvenile condors are generally a dull black with grayish heads. Their coloration begins to change after three or four years, but they don't reach full maturity until they are about 6 years old. Their long, featherless heads are hygienic adaptations that help the birds avoid problems associated with eating carrion.

Long ago, California condors soared over much of the western United States. By the mid 1800s, their numbers had dwindled, and they were mostly found in California — which is how they earned their name. Sightings were occasionally reported in other portions of the southwest, including Utah. Habitat loss, lead poisoning, poaching, power-line accidents and DDT contamination took a deadly toll. By 1987, the world's 22 remaining California condors, all living in the mountains above Santa Barbara, California, were captured and held in captivity.

A captive-breeding effort at southern California zoos helped the condors avoid extinction. In 1992, condors were reintroduced to the wild in California. Reintroductions followed in Arizona in 1996 and in Baja California, Mexico in 2003. There are now approximately 500 California condors in existence. Over half of those (about 350 birds) are flying free in parts of Arizona, California, Baja California and Utah. Condors are now producing chicks in the wild. The birds are protected under the Endangered Species Act and the Migratory Bird Treaty Act.

Condors are still released annually in northern Arizona. Many of the birds fly back and forth between Utah and Arizona on a regular basis, and there are now nearly 90 birds in the Arizona-Utah population.

In the wild, California condors may live up to 60 years. They mate for life and are attentive parents. At about the age of six, condors begin to look for a mate. Like many birds, males attract their partners through highly ritualized mating displays.

Before a California condor is released into the wild, biologists attach radio transmitters and number tags, which are used to identify and monitor each bird.

Female condors typically lay a single egg on the floor of a small cave or crevice in the face of a large cliff. Both parents help incubate the egg, which takes about 8 weeks to hatch. If the first egg fails, a second is often laid. After the egg hatches, the young condor will remain in its cave for 2–3 months. Most condors take their first flights when they are about 6 months old.

The juvenile condor's parents take care of their offspring for a full year — and sometimes longer. Because the adults spend so much time caring for their young, wild condor pairs normally nest every other year.

A diet with drawbacks

California condors are one of the largest members of the vulture family Cathartidae. Like their relatives, they are scavengers that feed on dead animals.

Condors often travel more than 200 miles per day in search of food. They feed primarily on large mammal carrion, like deer, sheep, elk and cattle. They also sometimes feed on smaller carrion, like rabbits, hares and coyotes. Despite their eating habits, condors bathe frequently and spend much time preening their feathers.

Unfortunately, condors aren't too picky about their meals. They eat everything, including the lead ammunition fragments that remain in the carcasses of hunted animals. Several studies have shown that lead poisoning is the leading cause of death in California condors, accounting for more than 50 percent of all known mortality. It is also the biggest factor slowing the birds' recovery. 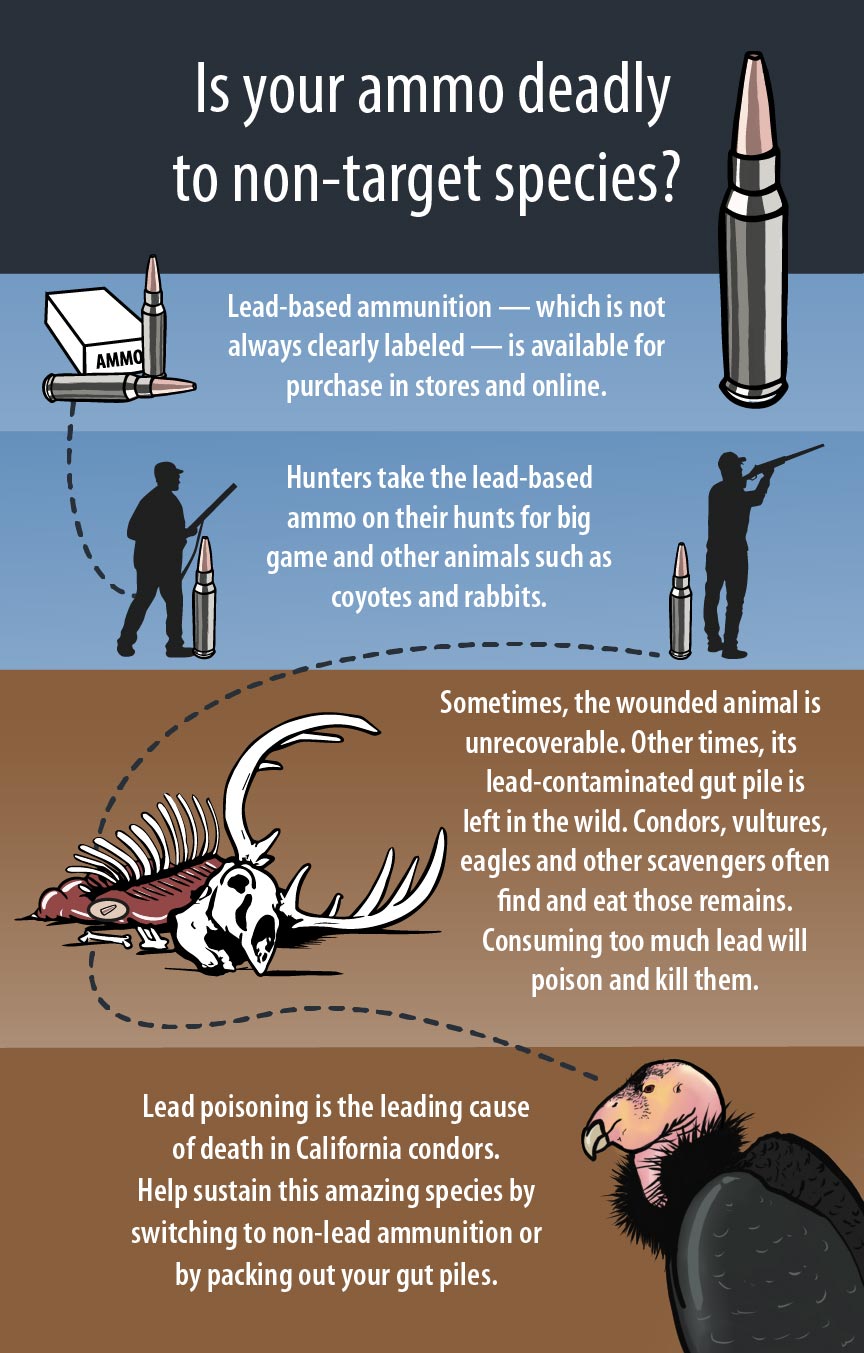 Since reintroduction began, dozens of condors in California and Arizona have perished because of lead poisoning.

If the poisoning isn't severe, biologists can capture the condors and treat them to lower their lead levels and return them to the wild. However, this is a time-consuming and expensive process. Other measures are being implemented to reduce condors' exposure to lead:

Although they often winter in Arizona, many condors from the southwestern population soar over Utah. They can travel back and forth between the Grand Canyon and Zion National Park in a single day.

The birds commonly visit Utah between April and November, but peak numbers usually occur from June through August. Their favorite places to roost are in the canyons of Zion National Park and the Kolob Terrace (the mountains north of the park). If you see a California condor in the wild, you should: