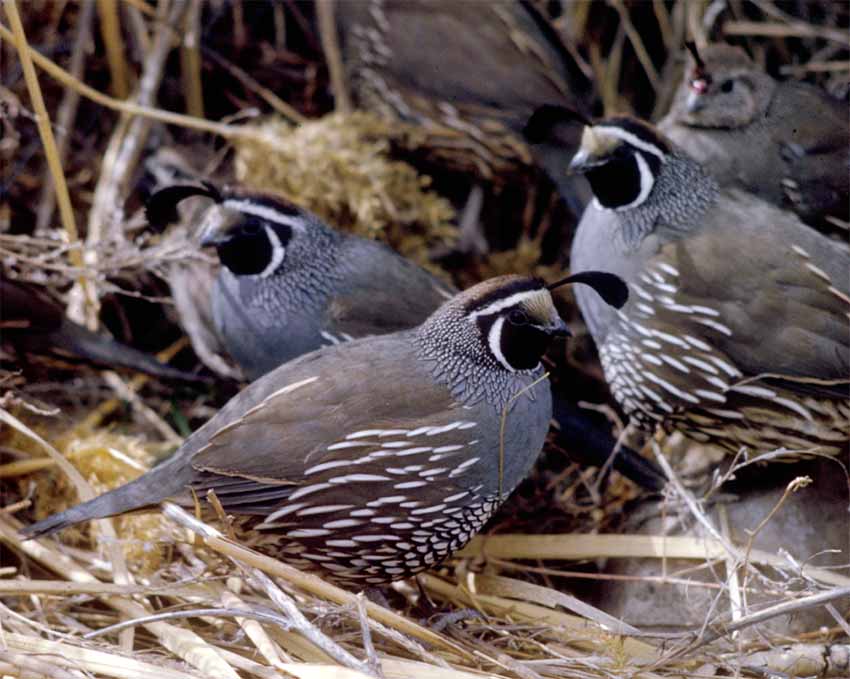 What are California quail doing in Utah?

Answer: They were first introduced from California in 1869.

Each winter the Utah Division of Wildlife Resources traps hundreds of California quail for relocation. People are often concerned about the safety of the birds and what we do with them.

What makes it a "California" quail?

When most people think of quail, a small, plumed bird probably comes to mind. Only California and Gambel's quail have that comma-shaped plume, and since they live in similar habitat, you have to look for small variations in plumage to tell them apart. The top of a California male's head is black, where the Gambel's is chestnut brown. Gambel's quail have a large black spot below a buff stripe on their lower abdomen where California quail have rich brassy and copper colored feathers.

Both California and Gambel's male quail have white brow and "jaw" stripes against a black face. Their upper breast is light blue, and they have olive grey wings and backs with white flecked sides. Females have no face mask, and are drab on the breast and abdomen for better camouflage when sitting on nests. These quail range in size from 9–11 inches and weigh six or seven ounces.

Where can you find them?

California quail thrive in brushy areas where they have ready access to water. They need dense brush where they can escape from predators, but prefer more grassy, herbaceous cover to nest in. Seeds, grains, berries, and especially clover make up their diet. They can actually live without water if they can eat enough moist, leafy greens-but in the desert that is very uncommon. This quail is a species that is very adapted to living near mankind. They are a common sight all over Salt Lake City in parks, golf courses, and even in people's back yards. Listen in the springtime for a male calling to his mate chi-ca-go, chi-ca-go, or you might be lucky enough to spot a female leading a dozen or so chicks to a feeding area.

Through the winter, the birds live together in coveys of 30–40. Beginning in early March they pair off, and begin nesting in May. Females make grass-lined nests among weeds, and lay from 10 to 16 eggs. The chicks hatch after 23 days of incubation. Both parents take care of the chicks, and if one parent is killed, often an unmated first year male will take over as a foster parent. Occasionally the female will lay a second clutch of eggs, and the male will assume full responsibility for the first brood. As a result of diverse predators, there is about a 50 percent death rate among chicks. 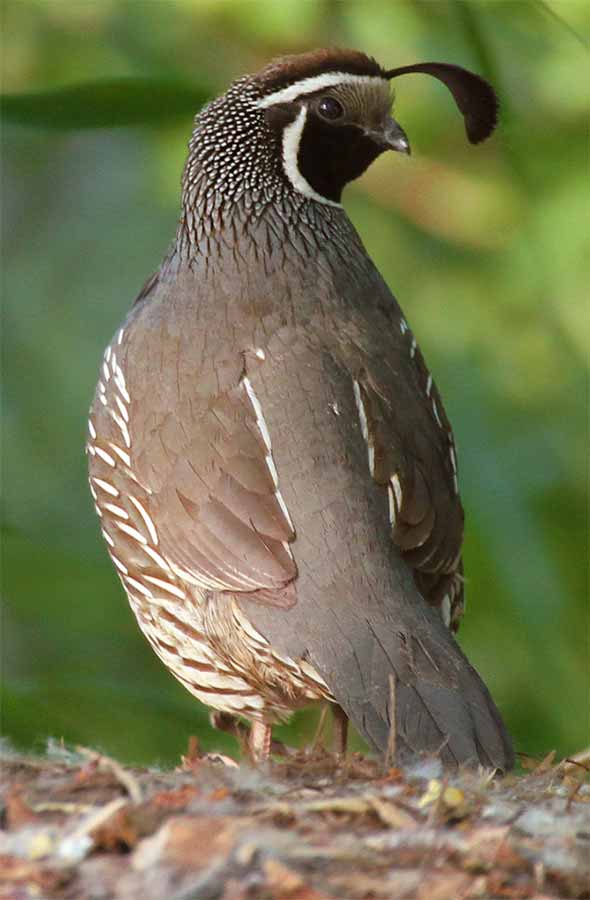 By taking quail out of urban areas, new populations are established by introducing those birds into new Utah habitats. Trapping occurs in winter when enough snow has fallen to make the quail's natural food difficult to reach and before they begin to pair off in the spring for mating. Winter coveys are then located in parks, golf courses and even in cemeteries. Wildlife technicians bait traps that can hold about thirty birds with wheat and cracked corn. Traps are checked once or twice each day. These traps are simple "walk in" traps with a large wire funnel on one end. Birds see the bait inside, walk through the funnel, and then cannot figure out how to walk back out. When a covey is captured, each quail's sex and age is recorded, and each is fitted with an aluminum leg band. The quail are then ready for transplant to their new home, which could be a State Wildlife Management area, public land, or private land.

So what are California quail doing in Utah?

These quail are native to the Pacific coast, from Oregon down to Baja California. Californians often don't call them California quail, but valley quail. In 1869, General Gibbon introduced the first fourteen pairs in the vicinity of Fort Douglas, Salt Lake City. Sightings of the quail with chicks were reported two years later. Other introductions have been made since to establish a healthy California quail population in and around Salt Lake City.

California quail are classified as an upland game species in Utah. Many quail live in urban areas where firearm discharge is prohibited. Before hunting on private land, be sure to get written permission from the land owner. Bird dogs are almost indispensable in locating and flushing coveys. A modified choke and shot size 7–8 work best on these small birds. If you harvest any birds with aluminum leg bands, please take note of the registration number and call your local DWR office to report it. Biologists use banding information to learn more about quail survival and distribution in Utah.